Why Marketing Debt Is Expensive 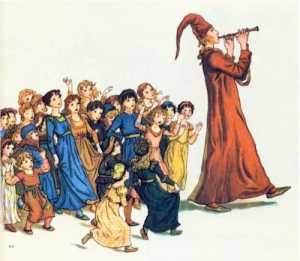 second you spend writing product code without a marketing plan would be better spent whistling dixie. Your’re not doing anything but accruing marketing debt. And it’s a real bitch to pay down.

Marketing debt takes it’s name from technical debt– writing ‘hacky’ code in order to get something barely functional. If you’re not a developer, writing code in technical debt is tantamount to turning up the car radio when you hear the engine making funny noises. It’s a deal with the devil. While the code works now, you’re writing an “IOU” to yourself because at some point in the future you’ll have to rewrite that code. Probably right as about you’re trying to take a vacation, get national news coverage or launch a huge new piece of the product.

There are teams working in basements, offices, and everywhere in between who would scoff at the mere existence of marketing debt. “The product is the marketing, good sir.” They’d say high mindedly. Not so.

What is marketing debt?

Marketing debt is when you leave out measurement or strategy, often in favor of getting to production faster. This can take on a number of incarnations, but they all put burden on the dev and growth teams. The Piper must be paid. Marketing is a particularly difficult Piper to pay because unlike code, there are opportunities that will only come along once, or pitfalls so serious that they can hold back an entire organization. Let me explain with a couple of examples.

I work with a client that deals with form fills. Their whole business revolves around being able to get people to provide information to them as cheaply as possible. In a recent conference call they were grilling me about how many more forms they could get from organic search per month, and how they could accelerate the process of getting there.

“Well, what’s your conversion rate?”
“Oh, we don’t know.”
“Oh alright, how many form fills are you getting from organic search?”
“We don’t know that either. Our funnel is really broken.”

Here we have upper management stomping their foot on the gas pedal trying to get MORE results, but they haven’t even begun to take the car out of neutral. They were so concerned with getting to that first form fill they neglected to think about every subsequent form fill after that. The rest of the conversation was spent working out a payment plan for the Piper so that they could at least measure where their budgets were affecting their revenue.

Starting with the end in mind is how to avoid marketing debt. Working backwards from revenue (or projected revenue), you’ll want to be able to find your top revenue generating actions, and the channels that drove them. Here’s a crummy graphic I made to help explain this. Despite having multiple channels and multiple revenue generating opportunities, you’ve got to ensure that each path has consistency and accuracy. 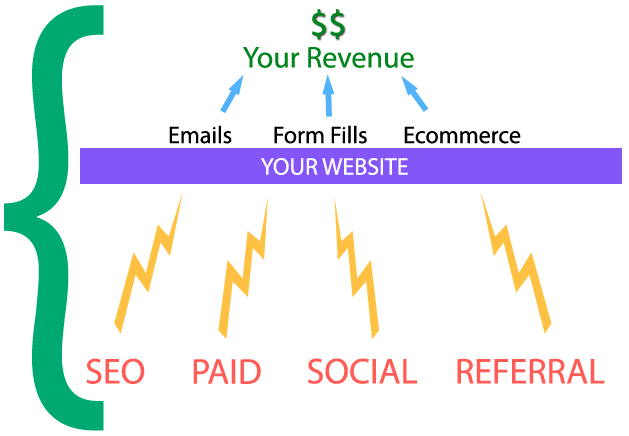 Besides consistency and accuracy, there is one more critical piece. Without being able to disseminate your accurate and consistent information across the organization, the marketing team can easily chase their tail. I personally subscribe to the notion of Kaizen. The English interpretation loosely means, “That which gets looked at, gets improved.” I worked a gig where in order to precisely determine the number of new sign ups, they had to login to the servers and issue a series of arcane commands. This did not lend itself well to dissemination of information. After two years of working on their site, they had only begun to start working on the marketing. Forget paying the Piper, this account had gone into collections and they were leaving angry voicemails.

Marketing debt doesn’t have to solely be lack of information. It can also be misaligned strategy. I frequently get hired to help people deal with penalties from Google because they wanted rankings fast, but didn’t consider what the cost would be if they got caught manipulating the algorithm. If you want to play fast and dirty with your SEO that’s your prerogative  but understand all your hard work may be wiped out in a single keystroke. If your long term marketing strategy doesn’t align with that risk profile, you’re accruing marketing debt. While the dirty tricks may work for this update, or even the next one, your desire to move the needle quickly with shortcuts is accruing marketing debt if you care about your organic traffic strategy for longer than a few quarters from now.

Without the end in mind, marketing debt is even easier to accrue than technical debt, and potentially more difficult to recover from. Without a culture of measuring and marketing in place, it’s easy to ignore these things just so you can “ship it”. If you’re lucky, you’ll get a ton of sign ups and be unsure where they came from. If you’re unlucky, your app will go viral, you’ll get more sign ups than you can handle followed by eerie silence. The silence of not knowing how all those people found you, and what they were really after. It’s time to pay the Piper.